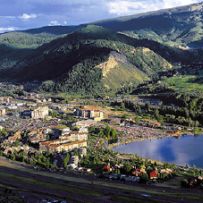 Avon is nestled at the base of Beaver Creek.

Nottingham Station, which contains Starbucks and Burger King, among several other businesses, was recently purchased by Osprey Capital, a Chicago-based company run by the Hoffmann family. In addition to Nottingham Station, the company has also purchased Chapel Square, the Annex, and the Christy Sports building.

AVON — One family-run company now owns most of the commercial real estate in the older part of Avon and significant changes are brewing.

Quietly, Osprey Capital, the commercial real estate holding company of the Hoffmann family of Chicago, this week announced that it had either purchased or has a contract to buy several commercial properties in town, adding more than 250,000 square feet. Work has already started on renovations and improvements at Benchmark Plaza and the Christy Sports building.

Hoffmann said he and his family have been coming to the Vail Valley on ski vacations for more than 30 years. Greg Hoffmann, David’s son and one of the company owners, said he’s skied Vail and Beaver Creek since he was 3 years old.

With that longtime connection to the valley, the Hoffmanns said they want to support their existing tenants, as well as bring new businesses to town. In the short term, that means a broad menu of improvements to the just-purchased buildings, from new roofing to new paint. In the longer term, David Hoffmann said there are more ambitious changes coming.

A release announcing Osprey’s acquisition of the property stated that future plans include everything from public art in the form of 12 bronze sculptures, purchased from Knox Galleries to perhaps a bowling alley and movie theater.

While the Christy Sports building housed a bowling alley back in the early 1980s, Hoffmann said his company will look at options including renovating or adding on to existing buildings, as well as the possibility of building an entirely new structure.

Aside from bowling and movies, Hoffmann said he’d like to recruit new businesses including a men’s clothing store, an ice cream/frozen yogurt shop and a hand car wash. Asked how he planned to draw those businesses, Hoffmann said his family also owns the nation’s fifth-largest executive recruiting business.

“We know about recruiting,” he said.

Having spent a lot of time in the valley, Hoffmann is also well aware that the part of Avon his family company now owns has some problems with traffic circulation and pedestrian traffic. To help get pedestrians across Avon Road, the Hoffmanns are now negotiating with Union Pacific Railroad to use the existing railroad bridge as a pedestrian path. As far as the street layout is concerned, Hoffmann said his company is already working with town officials.

Town officials have welcomed the news of the Hoffmanns’ investment in town, which could total $100 million.

In a release, Mayor Rich Carroll said, “We look forward to a long term shared vision that advances the retention and attraction of retail businesses to our eastern core.” Hoffmann said his family’s involvement is more than financial.

“When we come into communities, we get involved,” Hoffmann said, adding that the already “outstanding” location of the family company’s new property will be improved with the planned renovations.